Loorholz Spring/Frühling meeting/Treffen 2022 Very nice detailed Offshore AS332 Scale RC Model Helicopter CP: collective pitch. FP: fixed pitch. CCPM: cyclic collective pitch mixing—an electronic control system utilizing three servos spaced around the swashplate to combine aileron, elevator, and collective- pitch functions. ARF: almost ready to fly—usually needs radio equipment installed or minimal assembly. RTF: ready to fly—usually includes everything. Just unpack, charge the batteries, and go fly. BNF: bind and fly—a marketing term from Horizon Hobby describing ParkZone and E- flite models that come preassembled and ready to fly; all you have to do is bind them to a compatible 2.4 GHz radio. FBL: flybarless. The flybar imposes some gyroscopic stability to the rotor head. An FBL unit is a multi-axis gyro that replaces the flybar on the main rotor head. Instead of tinkering with paddle weight and mixing lever locations, you can change a slew of parameters with a software interface to the gyro unit. Many replace the tail gyro as well.

Not long ago, RC helicopters were nothing more than a curiosity. There was only a handful of kits on the market and you practically had to be a mechanical engineer to put one together. There might be one—or if you were lucky, two—helicopter pilots at a local flying field. Helicopter pilots would usually be left to themselves, subject to an array of whispered jokes such as, “Those things don’t fly; they are so ugly the ground repels them,” or “They don’t fly, they beat the air into submission,” and others. Knowing looks were exchanged by the airplane pilots that said, “He’s a nice enough guy but he’s a little strange; he flies helicopters.” Fast forward to today. At many flying fields, the helicopters present at a field can equal or even exceed the number of airplanes. Even if they are hidden in the back seat of their trucks, many of the sneering airplane pilots secretly own an electric helicopter or two. Now there are so many kits available in nearly every imaginable shape and size that a beginner interested in getting started in the hobby can easily be overwhelmed. Offerings range from RTF helis that you can unpack, charge, and fly, to kits that you have to build from bags of parts. Sizes range from diminutive electric-powered models that you can fly in your living room to turbine-powered scale masterpieces that require a trailer to transport them to the flying field. A first- time helicopter buyer is likely to encounter a confusing array of terms such as ARF, RTF, BNF, coaxial, fixed pitch, collective pitch, electric, nitro, and gas. What this article is going to attempt to do is explain these terms and help the first-time helicopter buyer make an informed decision concerning which category best suits his or her needs and interests. Sizes: Model helicopters used to be classified by the displacement of their nitro- and methanol-fueled engines. The .30 and .60 size engines were the most common in the past with the .30 size turning 500mm to 550mm blades and running engines from .28 to .32 cu. in. In the never-ending quest for “more power,” the .30 size evolved into the .37 to .39 range, then .46 and finally today’s .50 to .56 cu. in. engines. Blades got longer and booms had to be stretched to absorb the increased power. A modern .50-class helicopter usually turns 600mm to 620mm main rotor blades. The next class up was the more expensive and complicated .60-size models that have evolved into today’s fire-breathing .90-size monsters turning 700mm blades. Modern electric-powered helicopters are slightly more difficult to classify size wise, but they generally range from rotor spans in the 7-inch range (the tiny T-Rex 100) to the 700 size, spanning nearly 5½ feet. I’ve seen an electric-powered Scale helicopter with a main rotor span of slightly more than 90 inches! 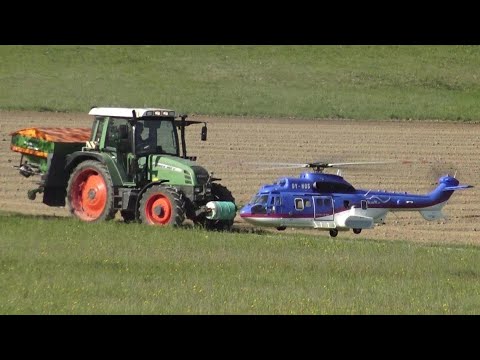