HUGE Sukhoi Su-30 RC turbine jet | Russian Сухой Су-30 | NATO code: Flanker AVAILABLE HERE: http://www.skymasterjets.net/su30.htm Specification: Length: 149.6" (3800mm) with the probe Wingspan: 96.7" (2457mm) Power: 2 x 16-20kg thrust Dry Weight: 26-29 kg Steve impresses the crowd (and me) with his superb flying of the Skymaster SU-30. #rc #radiocontrol #essentialrc Filmed by Dom for the 'Essential RC' Hi guys, this past friday I did the maiden of my new Skymaster SU-30. This jet is amazing the size and scale details it has is simply incredible. I ordered the jet pre build from Skymaster, here in Chile we had to install the turbines, batteries and made the programming, so building was quite fast and the general quality of the factory built was really impressive.
This is my favorite jet ever so I was quite nervous on the maiden flight.
Originally set the CG at 12mm being the front spar and went for it.
The jet flew amazing, thekoff was nice and smooth and the general flight had no issues. I did some basic maneuvers and then prepare for the stall test. Took top some height and took engines to idle, the jet came into a complete stop before lowering the nose, after that just let not get some speed and pull up. No issues at all.

Landing was a but more playful as it was very sensitive in pitch, I believe after talking to other that the CG might be a bit to far back, I added a bit more lead on the nose and i was better but still I think needs a little more weight, I will keep testing on this mater.

In general the jet si amazing, the looks is incredible and it fly's really well. I haven't tested yet the vector thrusts axs I want to know the jet really well before that.

For power I am suing two Jet Central Rhino 200, thew power is perfect for this jet, which weighted 34kg dry and 42kg wet. So the power was perfect, great verticals and I flew in regular pattern a bit over half engine.

I am using the new Powerbox CORE radio which is working incredible so I added to this jet the VSPEAK modules to have all the turbine info on my screen, I also added the pressure sensor for the landing gear and I hope to add a few sensors later on. The Royale SRS was connected to the telemetry as well but for some reason the surface movement became erratic, so we will check on that. The programing with the Core was really easy and straight forward. hovering all the mixes with the vector thrust a other with no problems at all. 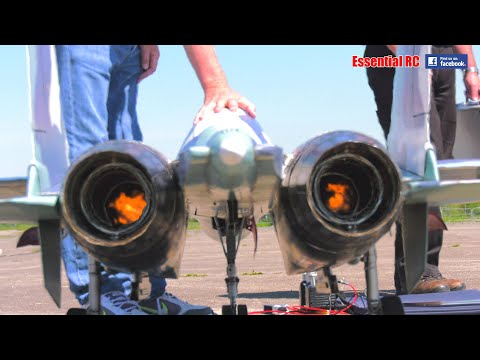