The AH-64 Apache from VARIO is a 950 size scale helicopter. You can power this remote-controlled model helicopter with electric propulsion. Hughes Aircraft is the creator of the man-carrying version and Boeing produces this helicopter. Intermediately, McDonnell Douglas was manufacturer. The Apache is a heavy, twin-engine attack helicopter (AH) used mainly by the US Army. This helicopter is very distinguishable by its unique tail rotor, its armaments and its undercarriage – our model is also correct in all these features. The GRP-parts fit together like a puzzle, for example the stabilizer is accurate in how it attaches to the fuselage.

For VARIO's 950 Apache we recommend a maximum main rotor speed of 1000 rpm. Electric drive sets from VARIO are already tuned to this head speed.

Our propulsion recommendation for this helicopter (Ord.No. 6300)! Contemporary mechanics, especially designed for the scale model electric flight. Electric motors are quiet, low in vibration, without exhaust gases and residual thrust. The blade slap noise sound of the rotor blades is more noticeable than with other types of propulsion and the result is a true-to-life impression in flight. For this electromechanical system we offer a drive set for 12S LiPos. 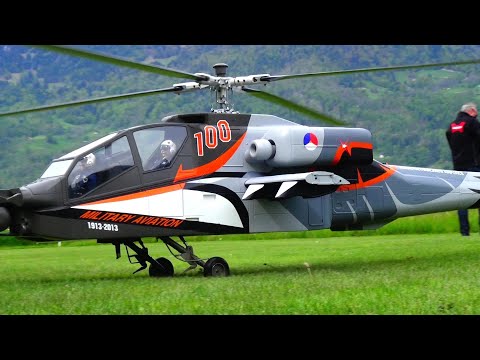