CONVAIR F2Y SEA DART | AMERICAN SEAPLANE FIGHTER AIRCRAFT | WATER TRIALS PART 2 The Convair F2Y Sea Dart was an American seaplane fighter aircraft that rode on twin hydro-skis during take-off and landing. It flew only as a prototype, and never entered mass production. It is the only seaplane to have exceeded the speed of sound. It was created in the 1950s, to overcome the problems with supersonic planes taking off and landing on aircraft carriers. The program was cancelled after a series of unsatisfactory results and a tragic accident on 4 November 1954, in which test pilot Charles E. Richbourg was killed when the Sea Dart he was piloting disintegrated in mid-air. The four surviving planes were retired in 1957, but some were kept in reserve until 1962. The Little Jet Company has undertaken a project to develop a 1:4 scale radio controlled twin jet turbine powered replica of the Sea Dart. Follow the progress of this project on either the Essential RC or Little Jet Company YouTube channels as the team encounters and overcomes the challenges of achieving the first flight of this amazing aircraft. In this second video you will see the Sea Dart on the water and accelerate to a fast taxi for the second time with Alex of The Little Jet Company explaining the challenges they have discovered and how the intend to overcome them. Look out for future video updates of this project on the Essential RC and Little Jet Company YouTube channels. Credit for historical footage: San Diego Air and Space Museum SEA DART SPECIFICATION: Length (including pitot tube): 5 meters Power: Twin JetCat P300s Guidance: Jeti Radio Electronics: MKS servos on Flight controls. Savox waterproof servos on Water Rudder. Weight: 100 kgs with fuel 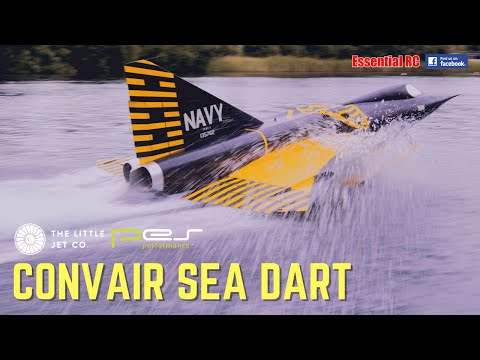