Heiko & Bernd Fischer at the airshow of MFC Hurlach 2017 Maßstab / Scale 1/7 Rotor: 2x 2.2 m Länge / Lenght: 2.2 m Gewicht / Weight: 22.4 Kg Motor: Kontronik Pyro 850/40 Cosmik-Regler 930 U/min (930 rmp) Eigenbau in GFK / Self made in GRP Boeing Vertol CH-46 Sea Knight The Sea Knight was also the United States Navy's standard medium-lift utility helicopter until it was phased out in favor of the MH-60S Knighthawk in the early 2000s. Canada also operated the Sea Knight, designated as CH-113, and operated them in the SAR role until 2004. Other export customers include Japan, Sweden, and Saudi Arabia. The commercial version is the BV 107-II, commonly referred to simply as the "Vertol".

The CH-113 Boeing Vertol LabradorU.S. twin-engine tandem-rotor, transport, and search-and-rescue helicopter designed and produced by the Vertol division of the Boeing Company from 1962 to 1971.This BIG RC CH-113 Boeing Vertol Labrador is a Canadian replica of a rescue and supply tandem helicopter that is exhibited in the museum in Ottawa / CanadaThis giant model has a rotor diamater of 2 x 2.2m with a lenght of 2.25m and a take-off weight of 22.6kg. The helicopter is powered by two Kontronik Pyro 850-40L electric motors. The pilot of this helicotper is Bernd Fischer.

The lift created by the dual coaxial rotors makes it possible to launch this heli off the ground like a rocket. Just give it full throttle and it shoots straight up without any loss of control. 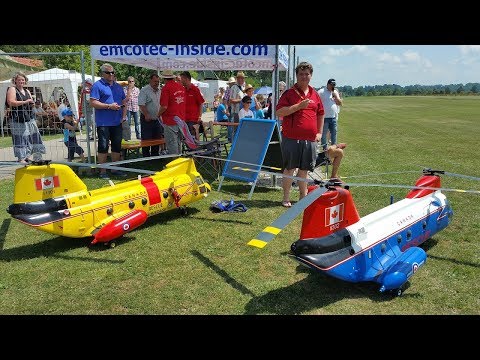